She is a hero of mine and a source of inspiration for all who work to advance basic human rights in Burma and around the world.

Saturday, November 13 was an exciting day for the democratic opposition party in Myanmar, as Daw Aung San Suu Kyi, the leader of the party, was released from house arrest. Although Mrs. Aung San Suu Kyi, age 65, has been a strong leader of the National League of Democracy, she has spent fifteen of the last twenty years in confinement. 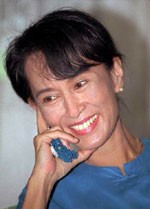 When Mrs. Aung San Suu Kyi set foot outside her house, she was greeted by the cheers and happy tears of thousands of her supporters. But Mrs. Aung San Suu Kyi faces immediate challenges, both for herself and for her party. She is charged with mending the National League of Democracy, which split during this year’s election. She has made it clear that she will re-enter the political scene immediately and publicly; for this reason Mrs. Aung San Suu Kyi is also in great danger of another arrest if she has further confrontations with the military government.

Efforts have been made by the U.S., the United Nations, and many other foreign countries to enforce justice in Myanmar. On October 9, 2009, Mrs. Aung San Suu Kyi was given permission to meet with foreign diplomats and discuss Western sanctions against the military junta.

Mrs. Aung San Suu Kyi has begun her new relationship with the military junta and the international scene with global publicity, and we can only hope that she will remain safe in fighting for her country’s unalienable rights.